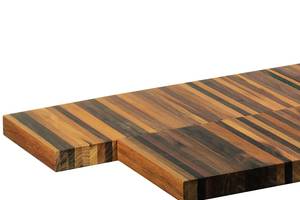 Vertical finger parquet according to EN 14761 consists of solid wood slats of hard- and softwood, joined together in an upright position, which are held together as laying units and glued to the subfloor. The thicknesses of the parquet are usually offered from 10 to 25 mm. The length of the slats ranges from 115 to 320 mm. The process is usually parallel laying at first, after that the parquet is getting an surface treatment. The most common types of wood are listed in Appendix A according to the harmonized standard EN 14761. The type of wood is selected depending on the requirements of use in the structure and must be stated. According to EN 14761 there are also no sorting rules for vertical finger parquet considering color, knot cluster, grain, sapwood and discolouration. However, it is recommended to define a free class for the respective type of wood and sorting. This free class has to be agreed between the contractual partners and must correspond to the predefined sorting characteristics. Principles of the free class are stated in Appendix B of EN 14761. Beside the mostly common vertical fingers, the EN 14761 also defines wide slats and modular blocks. The fire behaviour of the parquet is classified according to the classification report of the manufacturer or according to EN 13501-1 (Cfl-s1, Dfl-s1, Efl – according to product details and end-use condition). The CE-certification of wood flooring and parquet has been compulsory according to EN 14342 since 01.03.2010.