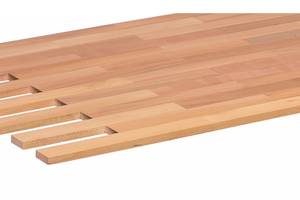 Mosaic parquet according to EN 13488 consists of individual solid wood slats with a thickness of 8 mm, a width of up to 35 mm and lengths of 115 to 165 mm, which as a laying unit, for example, are held together by netting glued to the bottom side. The mosaic parquet slats of equal dimension are joined into a square and thus form a mosaic cube, which like a chessboard can be joined into mosaic parquet panels. Further laying units are also possible, for example bond, herringbone, etc. The type of wood is selected depending on the requirements of use in the structure and must be stated. The most common types of wood (hard- and softwoods) are listed in Appendix A of the standard EN 13488. Sorting is undertaken into the three appearance classes ⚪, △ and ◻. Depending on the manufacturer further free sortings (classes) are also possible, they have to correspond to the principles of Appendix C of the standard EN 13488. The fire behaviour of the parquet is classified according to the classification report of the manufacturer or according to EN 13501-1 (Cfl-s1, Dfl-s1, Efl – according to product details and end-use condition). The CE-certification of wood flooring and parquet has been compulsory according to EN 14342 since 01.03.2010.